What’s the Difference Between Orange and Blue Indicating Silica Gel?

HOW IS INDICATING SILICA GEL DIFFERENT FROM OTHER DESICCANT?

Indicating silica gel is chemically treated to transition from one color to another as it adsorbs moisture and eventually saturates. This trait makes bulk silica gel ideal for removing moisture from air and gases.

Indicating silica gel also provides a rapid detection method that enables users to quickly determine when desiccant needs to be recharged or replaced when drying air and gas streams. Indicating desiccant does this by changing color as it becomes increasingly saturated with moisture.

Conversely, non-indicating desiccant forms do not provide a way to determine saturation level, resulting in added difficulty when evaluating the amount of moisture adsorbed by the desiccant.

This silica gel appears orange/yellow in color when dry and green after the desiccant becomes saturated with moisture to about 15% by weight.

In addition, Orange Silica Gel is a non-toxic, pollution-free desiccant that will meet the needs of environmentally-conscious companies. This orange silica gel can be used in many applications where visual control of moisture is required, such as in compressed air dryers, breathers, and for protection of non‐consumable packaged goods, as well as drying and storing flowers and seeds. That said, Orange Silica Gel should not be used in direct contact with products that are intended for consumption, such as food and pharmaceuticals. 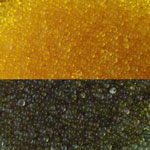 WHY USE ORANGE INDICATING SILICA GEL?

In 1998, the European Union prohibited Blue Indicating Silica Gel (which contains cobalt chloride, a known human toxin) from being sold within European markets. Alternatively, Orange Indicating Silica Gel, which is used in a variety of the same industries and applications, such as transformer breathers and compressed air dryers, conforms to the European Union requirements for moisture indicating desiccants.

In addition to conforming to EU requirements, AGM's Orange Silica Gel also has a high adsorption capacity, and will remove moisture at temperatures as high as 150° F (65°C). However, it is best used at room temperature (70‐90° F /21-32°C). 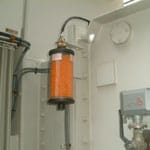 This silica gel is a bead or granule that has been washed with a concentration of cobalt chloride (a heavy metal salt). The cobalt chloride is a deep-blue color when dry and turns from blue to pink as it becomes saturated.

Blue Silica Gel can be used in many of the same applications as Orange Silica Gel; however, due to the addition of the moisture indicator (cobalt chloride), Blue Silica Gel should not be used in direct contact with products intended for consumption, such as food or pharmaceuticals.

Why Use Blue Indicating Silica Gel? 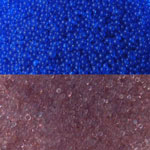 WHICH DESICCANT IS BEST FOR YOU?

Check out our blog that goes through the ins-and-outs of which type of desiccant is best.

Desi View® is the trade name of a bagged indicating silica gel mixture sold by AGM. The Desi View mixture consists of either 90% clay or 90% silica gel; the remaining 10% is always indicating.

Desi View bags are only 10% indicating for two reasons:

Indicating silica gel is also available in special packet sizes for use in electronics, pharmaceutical, or food packaging.